Society has grappled with racial inequality and witnessed blatant discriminatory and hate-filled comments find a home in the comments section on social media. This can no longer be our reality.

It’s time to take a firm and public stand against hate speech on social media. We have chosen to highlight 16 brands that aren’t just saying enough to be on the right side of history but are taking real action that will bring about change.

Before delving into the actions brands have taken, it’s important to note that hiding online hate speech is different from limiting one's freedom of speech. Free speech or freedom of expression is the right to seek, receive, and impart information and ideas of all kinds, either orally, in writing, or through any other media. The exercise of this right carries specific duties and responsibilities and may, therefore, be subject to certain restrictions.

Protect your community with BrandBastion

BrandBastion encourages open and civil discourse, but we also recommend comment moderation to keep your social community safe. The content and comments made on your brand's social pages are representative of your brand and its values. Diligence is therefore critical when choosing to hide, delete, or respond to your online community. Harmful comments should be hidden to protect social media users and encourage a safe environment across ads and organic posts.

BrandBastion’s Moderation and Alerts Solution gives your brand peace of mind by moderating comments at scale 24/7 so that you can be certain racist, hateful, and discriminatory comments are removed from your social pages. Alerts are also sent when attention is required so that your brand can choose how to react. Should you need help responding to comments at scale, BrandBastion’s Customer Engagement Solution responds to comments, complaints, and feedback on your brand’s behalf while prioritizing your brand’s safety. Responses are predetermined so that your brand can ensure only pre-approved responses that align with your brand identity are sent.

Amid ongoing debates around divisive speech and what should and should not be allowed on social networks, BBC Sport in the UK has taken a new approach to trolls and hateful remarks on its social media posts.

BBC Sport shared publicly on several social media accounts that they will:

The English Premier League has created an action plan to eliminate racism in all areas of the game after an onslaught of abuse and racial slurs were used to attack players on social media. The plan focuses on taking action against all forms of racism to act in the fight against online attacks and abuse. The league also revealed its commitment to raising awareness and educating fans while making the report of abusive behavior more effective.

Chelsea FC is among one of the English clubs taking action to stop racism online. Chelsea owner, Roman Abramovich, announced plans for the club to tackle discrimination in response to attacks on one of his players. In a letter condemning those involved, he wrote:

“We cannot allow this to continue unchecked. I have therefore directed the board to further increase the club’s efforts in this area and I will personally direct more funds towards this important work.” 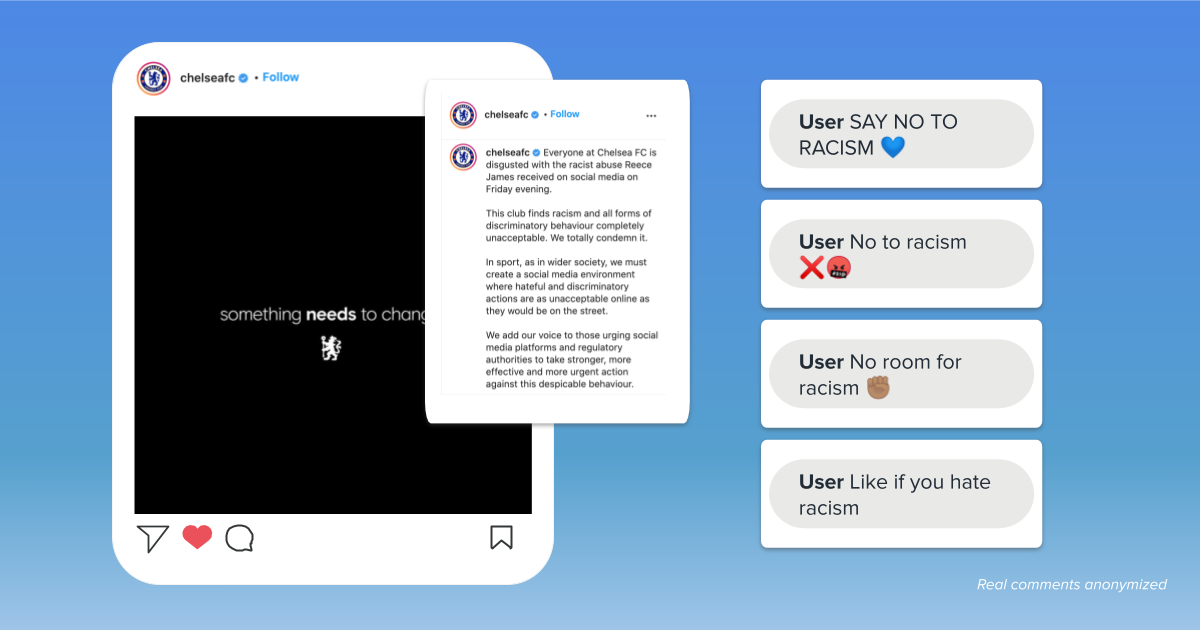 “Humanity and social media at its worst. Yes, I’m a black man and I live every day proud that I am. No one, or no one comment, is going to make me feel any different. So sorry if you were looking for a strong reaction, you’re just simply not going to get it here.

Commenters took to social media to applaud the football club for their commitment to tackling racism online, leaving messages on the Club’s Instagram such as: “criticism is fine, but not racial abuse.” People are demanding change and are evidently open to moderation if it means protecting the general public and online communities. 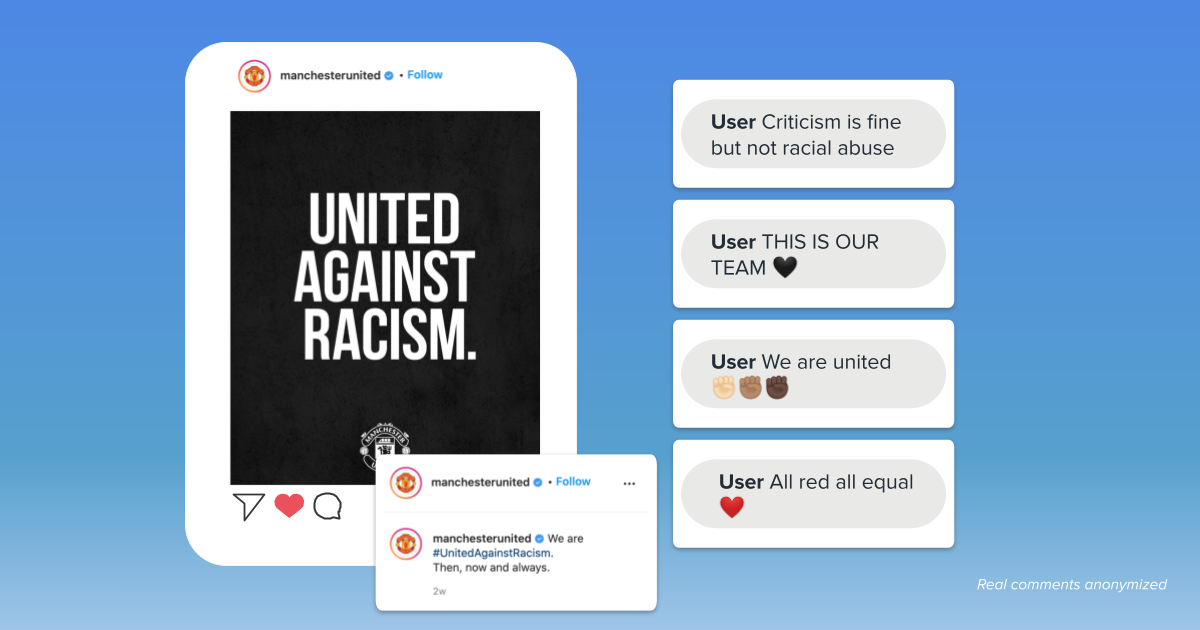 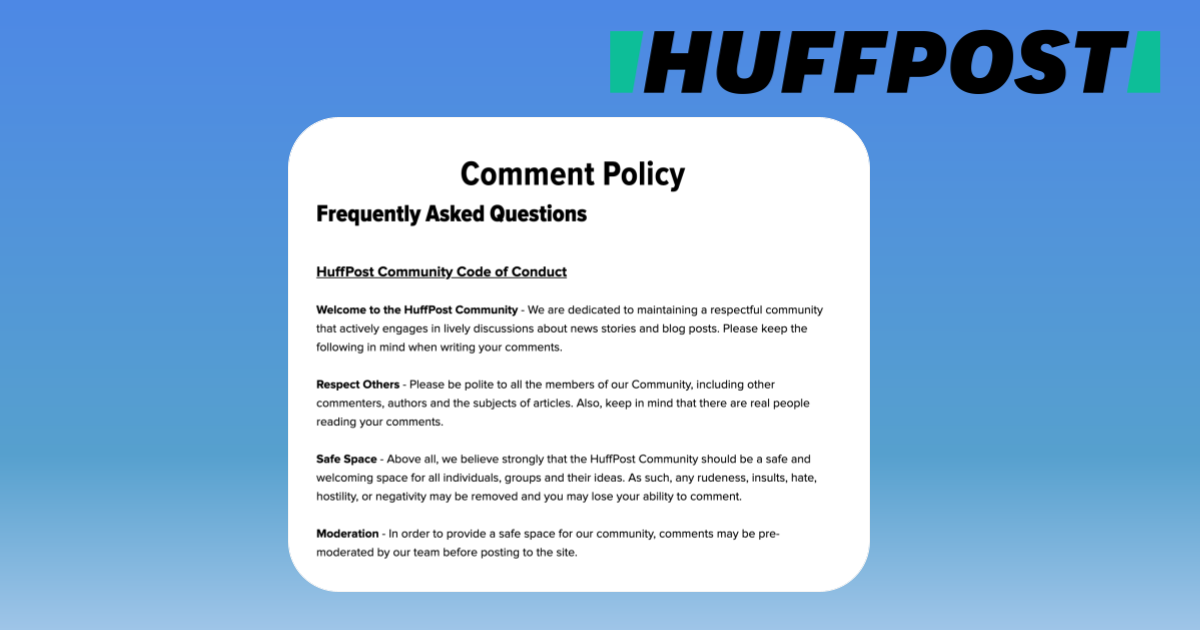 After a slew of racist comments targeted a Sainsbury Christmas ad that featured a black family, well-known grocery stores joined together in the fight against racism. Channel 4, Aldi, Asda, Co-op, Iceland, Lidl, M&S, Sainsbury’s, Tesco and Waitrose used the hashtag #StandAgainstRacism and aired their ads on Channel 4 next to one another, something competitors typically strongly avoid. The full version of the Sainsbury ad was also broadcast twice in a two-hour time slot.

“As an anti-racist organization, we are incredibly proud to stand together with Sainsbury’s and our retail partners against racism, using our national platform to call out the unacceptable reaction to Sainsbury’s Christmas ad.”

Christmas is a time to come together. This year, we’re coming together with @AldiUK@asda @coopuk @IcelandFoods @LidlGB @marksandspencer @sainsburys @Tesco &@waitrose to stand against racism. If you’re not into that kind of thing, feel free to unfollow.#StandAgainstRacism #Ad pic.twitter.com/EwKw3fdwHr

Co-op UK was among the UK grocers that took a firm stance against racism following racist reactions to the Sainsbury Christmas ad mentioned above. The retail food business clearly stated that action will be taken against those who leave racist comments on its social media pages. According to the Co-Op UK’s Instagram page, racist comments will be reported, deleted, and blocked in an aim to build an open and safe online social community. 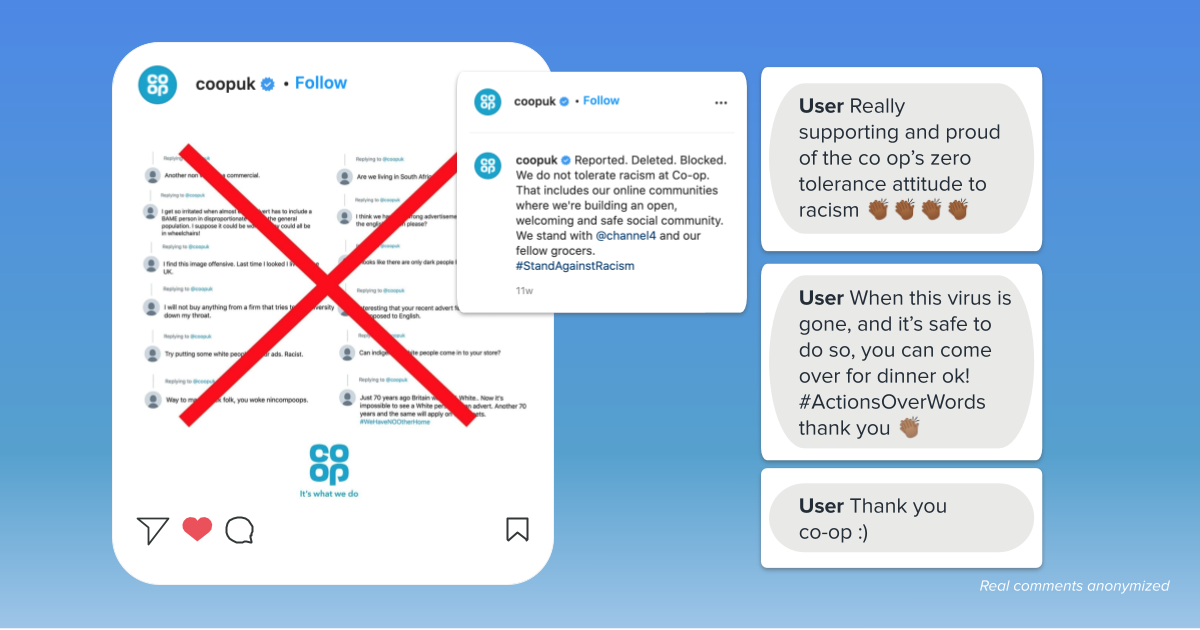 American exercise equipment and media company, Peloton, has spoken out regarding the violent attacks against Asians in America in recent weeks. They announced that they will donate $100,000 to the Asian American Federation in an aim to work towards being a truly anti-racist company. Peloton followers took to social media to applaud the company, saying “[this] made me so proud to invest my time and literally energy to you all.” 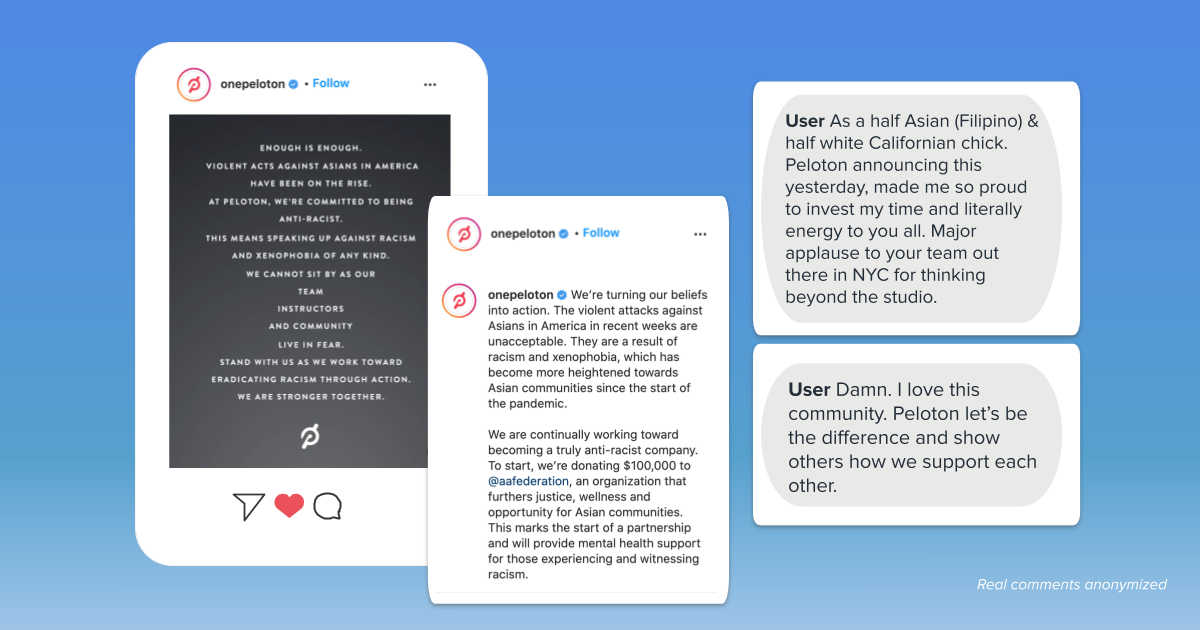 East Idaho News publicly expressed in an article on their website why and how they moderate comments in their online community. Debate has been actively encouraged on the news site, but it has caused serious challenges. One major challenge is that people are afraid to engage due to the nature of the comments left in the community. Another challenge is that people, and trolls, come to the news site to engage in or simply observe drama in the comments section. These people and comments take away from productive conversations in the East Idaho News' online community. In the past, the site was proud that they publicly responded to, rather than removed, false comments and trolls. However, in recent years, the news site expressed a need to go in a new direction after racist and hateful comments were becoming the new norm:

“Please understand that while we cherish a person’s right to speak freely, our goal was never to create a haven for trolls at the expense of people who are interested in honest, kind, and civil discourse.” 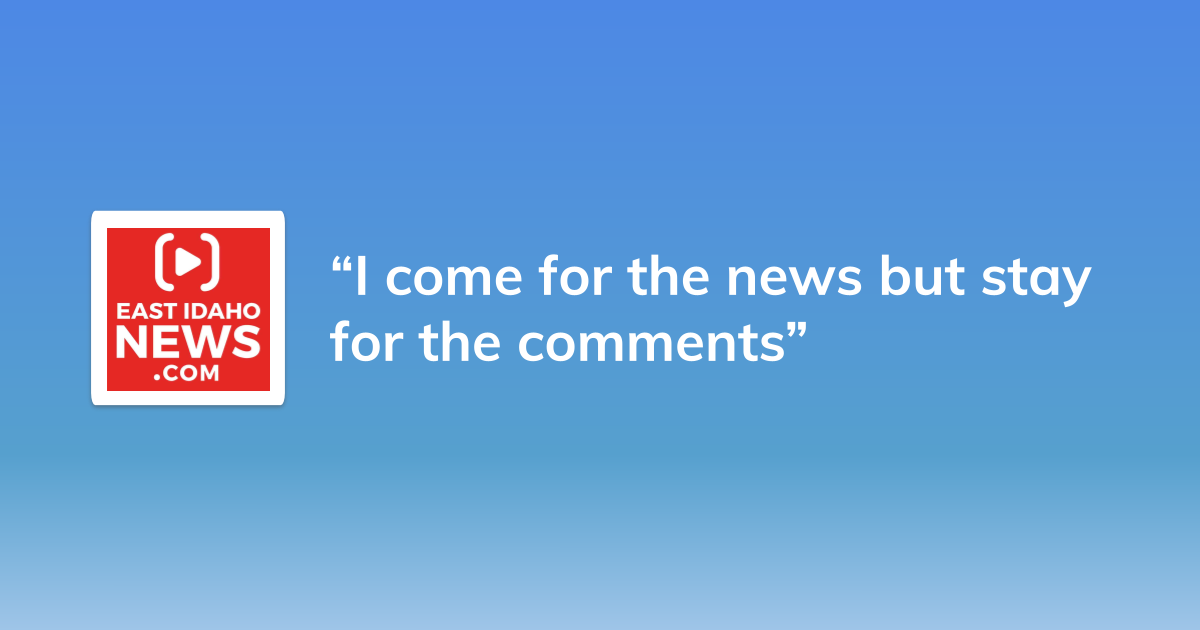 It’s no surprise that the British Royal Family has had to combat online trolls, sexist comments, and racist remarks daily. A spokesman from Buckingham palace spoke about moderating Queen Elizabeth’s Facebook Page. He stated, “We have removed words that were either sexually explicit or used foul language, irrespective of the viewpoint. It’s not a surprise [that the moderators needed to step in]. Everyone potentially faces this problem on Facebook, not only the British monarchy.”

In 2021, discussion arose regarding the pressure Meghan, Duchess of Sussex and Prince Harry, were under and the online scrutiny they faced. Buckingham Palace, Clarence House, and Kensington Palace publicly announced that they were reporting offensive, racist and sexist comments. In fact, Kensington Palace officials said they were spending many hours a week hiding thousands of online attacks against Meghan Markle.

BrandBastion discovered that hate speech, discrimination, bullying, and spam online were at an all-time high in 2020. Consumers in 2021 are not tolerant of brands that fail to stand against racism publicly, fail to blend intention with action, and fail to create safe online communities where hate speech and bullying are not tolerated. We are taking a stance against hate speech to create a space on social media for productive and meaningful conversations to be had.

If you work in social media, you know that posting regularly isn't enough anymore. Engagement is paramount to defining...

Why Comments Matter in the Entertainment Industry

Engagement on ads and organic is paramount for brands, especially in the entertainment industry where engagement is huge...

Why Comments Matter to PR Teams

Comments indicate more than your PR team might suppose. They can help you avoid and prepare for a PR crisis, understand ...