From fraud prevention to community safety, and the protection of personal information; these are the three common challenges faced by dating apps marketing on social

Dating apps are maturing in usage. From starting out as a niche, they are becoming an accepted and mainstream way to meet a partner. Three in ten U.S. adults say they have used a dating site or app. And for those aged between 18 to 29 years, that figure jumps to 48%, almost half of the total population in that age bracket (Pew Research).

For dating apps marketing on social media platforms like Facebook in 2020, the bar for entry is high. Gone are the days when dating apps were littered with click-bait. Today, advertising a dating service on Facebook requires a rigorous approval process. Along with that, dating services must follow strict guidelines. This includes avoiding the use of pixelated images, wording like “adult friend finder”, or any form of targeting directed at those who have indicated they are already in a relationship.

Yet this vetting process is only the start of challenges that dating app marketers face in their quest for users. Dating apps advertising their services are subject to ongoing scrutiny and have to reckon with common issues faced on these platforms. These include issues such as catfishing and fraud, bullying and harassment, and threats to physical safety.

The biggest complaints users have about dating apps

Research by Kaspersky Lab and B2B International found that over half (57%) of online daters exaggerate or lie about some aspects of themselves when completing their profile. The most common elements that people misrepresent include appearances, income, and their existing relationship status.

The term used to describe someone who misrepresents himself or herself has become embedded in modern-day culture. Even both Oxford and Merriam-Webster have added “catfish” to their dictionaries. The term defines “a person who sets up a false personal profile on a social networking site for fraudulent or deceptive purposes.”

In some cases, catfishing can be driven by low-self esteem or a desire for escapism (by pretending to be someone else). But the spectrum of such behavior is vast. It can range from attention-seeking to the downright devastating, such as scamming someone for money.

One in five people who use online dating services says they have been asked for money over the internet, according to UK Finance. Recently, CNN reported that Americans lost $201 million in online romance scams in 2019. This amount was higher than that of any other reported fraud in that year.

To combat the prevalence of catfishing, Tinder has introduced a verification feature. This feature requires users to submit several real-time selfies that the app will use to verify uploaded profile photos. If the appearances match, the user’s profile will be updated with a blue verification tick.

Despite dating apps introducing in-app features to deter catfishing, a handful of users will always find a way to work around the deterrents. It just takes a few negative experiences for users to get turned off. And where do these users go to share their stories? Social media, of course! Dating ads tend to attract negative comments from users sharing their catfishing experiences. This then impacts their brand and their reputation, even if they have introduced measures to keep their own platform free of fraud.

According to the Pew Research Center, younger women are especially likely to report having troublesome interactions on online dating platforms. Six-in-ten female users ages 18 to 34 say someone on a dating site or app continued to contact them after they said they were not interested. 57% report that another user has sent them a sexually explicit message or image they didn’t ask for. 44% report that someone called them an offensive name on a dating site or app. And 19% say they have had someone threaten to physically harm them.

There are plenty of Instagram accounts dedicated to exposing “Tinder nightmares”. However, Tinder found that users reported only a fraction of behavior that violated its community standards.

Recently, Tinder has turned to artificial intelligence to help in screening potentially offensive messages. If a message gets flagged in the system, Tinder will ask its recipient: “Does this bother you?” If the answer is yes, Tinder will direct them to its report form. The new feature is available in 11 countries and nine languages currently, with plans to expand wherever the app is used.

Additionally, Tinder has launched a “panic button” feature that gives users the option of pre-uploading details about an upcoming date. They will then be able to press a panic button during the date if necessary. This will prompt the app to contact emergency services with the user’s location data and details.

Dating apps’ may be stepping up efforts to build safety features into their platform. However, these apps still run the risk of users seeing toxic, discriminatory, and bullying comments on their ads. If these comments are not moderated, they can act as a warning signal for women being targeted by the ads.

A special report by Edelman found that 47% out of over 33,000 respondents believe that points of view (such as comments) that appear near a brand’s advertising and marketing are an indication of that brand’s values. Users seeing ads with toxic comments underneath them may well associate the toxicity with the brand itself.

3. Lack of protection of personal information

Concerns over data privacy have escalated in recent years. Even if dating app users don’t encounter deceptive profiles, many of them are uncomfortable with the sheer amount of personal data they have to reveal to match with someone.

In February 2020, Ireland’s Data Protection Commission (DPC) announced a formal probe of how Tinder processes users’ personal data. This probe followed accusations by several users that the company did not provide a copy of all the data it holds on them.

Even if a dating app has stringent data protection practices in place, all it takes is one user accusing the app of misusing his or her information for a social media comment to turn into a crisis. Companies need to be on the lookout for such claims on social media and react promptly to any user complaints or demands related to data processing.

Despite the risks associated with online dating, the number of people using dating apps continues to grow. Research from the University of New Mexico shows that around 40% of heterosexual couples in the U.S. met online in 2017. For same-sex couples, the number jumps to over 60%.

Additionally, research has found evidence that online dating leads to more diverse and longer-lasting relationships and marriages. This could be due to online daters being quicker to focus on shared values compared to their counterparts who typically meet through common social groups or spending time in the same physical locations.

The variety of options hopeful singles have to find love has also been growing. Dating apps marketing their services range from the niche like Hinge, Bumble, EliteSingles, Uniform Dating, and The Inner Circle -- to the mainstream, including the new Facebook Dating. Facebook Dating launched in the U.S. in September 2019 and continues to be rolled out to more regions in 2020.

What can dating apps marketing on social media do to protect their community and brand?

As online dating apps continue to mature, the competition is fierce. Brands in this space need to constantly work to establish trust and credibility. From our work with dating and matchmaking platforms, we recommend that brands in this space:

1. Take a serious, proactive approach towards addressing any claims of fraud, deception, and threats to safety.

Any claims about user’s safety being threatened or any fraud (Example: “Worst website ever. The site is a huge scam. Tons of fake profiles.”) need to be taken seriously and addressed. Proactively responding to claims made in the comments of ads and posts is important for two reasons. First, it allows the brand to address the issue being raised by a specific user. Secondly, it allows the brand to demonstrate to the entire community watching that this is a top priority for them.

In order to find the needles in the haystack of a flood of different types of comments AND effectively respond to them, a response strategy is needed. This includes:

Having this in place will allow fast and effective responding to manage perception and protect user safety.

Ads and posts for dating apps typically attract comments containing language that can be offensive, bullying, or discriminatory against the individuals featured in the ad. 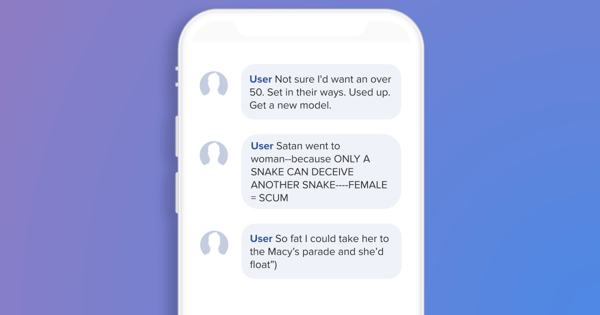 This can turn people off from signing up for the service, as they may fear to become the target of similar discrimination within the app.

Not only that - leaving such comments visible on social media posts conveys to the audience that safety and harassment are not taken seriously. 47% out of over 33,000 respondents to Edelman’s Trust Barometer 2018 report believe that comments that appear near a brand’s advertising and marketing are an indication of that brand’s values.

If these issues are not taken seriously on public ads, can users expect much more within the walled garden of an app?

A big part of allaying users’ fears or doubts about using a dating app involves showcasing successful matches made through the platform. Some brands that do this well include Match and okcupid. 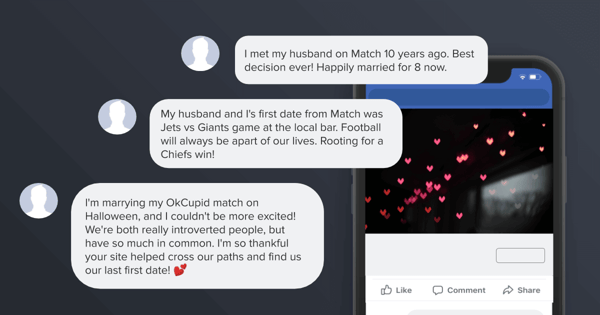 By showcasing that there are real people benefiting from the service, dating apps marketing on social media can continue to build trust and establish credibility with the audience they are targeting.

Learn how BrandBastion can help your brand succeed on social media.
Get in touch with us to begin the conversation!

5 Examples of Social Media Crisis: What Can We Learn?

Social media can be a powerful tool for businesses and organizations to connect with their target audience and build rel...

Have you ever worried about a comment on your Facebook ads spiraling into a PR crisis? As a marketer, you’ve probably st...

5 Reasons Why Comments Matter on TikTok

(And How to Start Generating More Engagement!) TikTok is the latest channel that has captured a lot of attention for mar...