The recent lawsuit filed by the sports brand and its subsidiary, Reebok, against 53 counterfeit sellers on social media platforms highlights a widespread problem and the need for more robust policing of these platforms.

Several weeks ago, Adidas and Reebok filed a lawsuit against sellers promoting counterfeit goods on eBay, Bonanza, iOffer, and Instagram. This lawsuit marks an important milestone in intellectual property law, as it underlines the importance of online policing strategies for brands at risk of trademark infringement.

According to World Trademark Review, the filing calls for “injunctions against the sellers, for their seller IDs (and others being controlled by the sellers) to be disabled, an award of profits and damages of $2 million per counterfeit trademark used/product sold, costs and an order that financial institutions, payment processors and banks identify and restrain all funds, up to and including the total amount of judgment, in all financial accounts and/or sub-accounts used in connection with the Seller IDs or other alias seller identifications.”

In the suit, social platforms were called out for allowing such sellers to employ and benefit from "substantially similar paid advertising and marketing strategies based, in large measure, upon an illegal use of counterfeits and infringements of [the] plaintiffs' marks.” 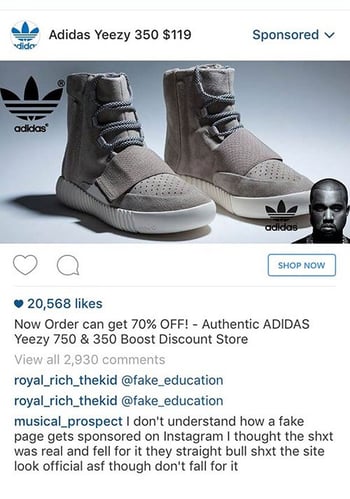 Such tactics have a serious impact for copyright and trademark holders who have invested enormous sums of money into brand-building. While the luxury online retail market is estimated to reach an impressive $41.88 billion by 2019, according to Bain & Co., this figure is just a fraction of the booming business of the $461 billion global counterfeit goods market funding large-scale criminal operations. Tens of thousands of Instagram accounts impersonating luxury brands are collectively responsible for millions of posts promoting and selling these fake goods.

As the Adidas and Reebok lawsuit states, these illegal sellers are using their marks "to drive Internet consumer traffic to their e-commerce stores or social media accounts... thereby increasing the value of the seller IDs and decreasing the size and value of [the] plaintiffs' legitimate marketplace.” Not only do the actions of counterfeit sellers impact legitimate companies’ sales and bottom lines, they also negatively impact a brand’s reputation. Consumers get confused by the many bootleg alternatives flooding the market, which dilutes the brand value.

In 2017, BrandBastion examined a sample of 36,000 comments from the Instagram posts of 12 top luxury brands including Salvatore Ferragamo, Manolo Blahnik, Burberry, and Versace, who collectively, had a combined reach of more than 62 million followers. See the details of this analysis in the slideshow below:

The results were eye-opening. One in 18 comments included a serious threat for brands, with major dangers including 729 (2.03 percent) comments leading to direct counterfeiting from 94 counterfeit sellers; 1,013 comments (2.81 percent) containing spam and scams; and 208 (0.58 percent) containing brand attacks from avid activists, occasionally calling for boycotts. As a whole, between 3.4 to 8.3 percent of a brand’s comments contained either a counterfeit promotion or a brand reputational threat.

The Adidas and Reebok case serves as a reminder that these threats are not limited only to luxury fashion brands, but is impacting retail brands across the board, from footwear to even more frighteningly, children’s toys and pharmaceuticals, which could contain all sorts of detrimental health risks.

Counterfeiting is not a new problem. The issue is that social media platforms have made it easier than ever for illicit sellers to reach wider audiences. This problem is fueled and exacerbated by “social bots and a growing underground counterfeit economy, hijacking brand advertising efforts”, wrote BrandBastion CEO Jenny Wolfram in Entrepreneur.com last October.

As social platforms increase the number of ways for advertisers to engage with their fan bases and communities, “the frauds are hot on their heels, armed with ad campaigns and bots, retargeting their users and flooding sites with illegal goods. This safe harbor creates a playground for fraudsters using aggressive tactics, even hijacking a brand’s own social media posts or ads to target audiences with counterfeit copies.”

Will social media sites be held to account for allowing counterfeiting activity to exist?

The Adidas case, then, is commanding a significant amount of interest for luxury and fashion brands who are waiting to see if social platforms will start enforcing stricter policing standards. As Engadget notes, “even if the approval of these ads is unintentional, social networks are still making money off them.” The Fashion Law wrote that this case in particular is “shedding light on a widespread problem on the Facebook-owned social platform, in which counterfeit-selling accounts are able to pay for sponsored posts to promote their illegal goods 'intentionally or with reckless disregard for [the trademark holders'] rights.”

With 71% of all businesses using Instagram as a key sales and marketing channel in 2017, and that number projected to grow to 82% (eMarketer), and Instagram still remaining in third place (behind Facebook and YouTube) in terms of social platforms that pose the biggest brand protection challenge (Global Trademark Benchmarking Survey 2018), this lawsuit could not be timelier.

How soon, and whether or not, online platforms will take stricter enforcement action against counterfeit sellers remains to be seen. Nonetheless, this lawsuit serves as a reminder for retail brands everywhere that they should not leave such policing to the platforms. Instead, any brand who is concerned about its intellectual property should actively monitor and safeguard their social platforms from these revenue-impacting criminal activities.

Want to learn how BrandBastion helps brands manage comments from counterfeit sellers and infringement of intellectual property on social platforms?

IP & Copyright Infringement As Seen In

Why Kicking Out Counterfeit Crooks on Instagram Is So Important

This article was originally published by BrandBastion CEO Jenny Wolfram on Entrepreneur.com.

How Counterfeit Sellers Are Hijacking Luxury Brands on Instagram

The shift to digital for luxury brands has lead to both great opportunities and risks. The vulnerability a luxury brand ...