Many influencers on social media use these platforms as a way to grow a following and hopefully make it big in Hollywood some day. Will Smith is a personality who has gone in exactly the opposite direction. Despite having attained superstar status (underlined by his star on the Hollywood Walk of Fame), Will isn’t resting on his laurels.

While he is famously known to be anti-social media, he started having an active presence on YouTube late last year and on Instagram earlier this year, vlogging and sharing pieces of his life through these channels. Within months, he had grown his following to the millions by giving people a non-filtered look into his life as a father, husband, motivational speaker, perhaps the most famous Philadelphia Eagle fan around, and now, top Instagram influencer.

We had the great privilege of catching Will Smith in action giving a talk at Advertising Week New York, and took away lots of great insights from his session on everything from marketing, to dealing with fear, to the power of storytelling. His journey from Hollywood to social media underlines the importance of the work we do at BrandBastion, including why it’s so important - and yet easier than ever - to listen and to have a two-way conversation on these media.

On what works in marketing today:

“Pay attention in real time rather than just planning ahead. Marketing is no longer about having a well planned thing. Pay attention, listen, listen, listen and then grab onto stuff!” Will adds that the comments on his posts keep him close to his audience, and he always checks reactions to see what people are saying.

On why it’s important to him to listen to comments:

“Comments are better than looking at [engagement] numbers. Being in the comments you can get context for numbers. If you just look at, for example, movie sales and they look great, you don’t know why. It could be that nothing else opened that weekend. Comments will give you context on whether the movie was liked or not.” 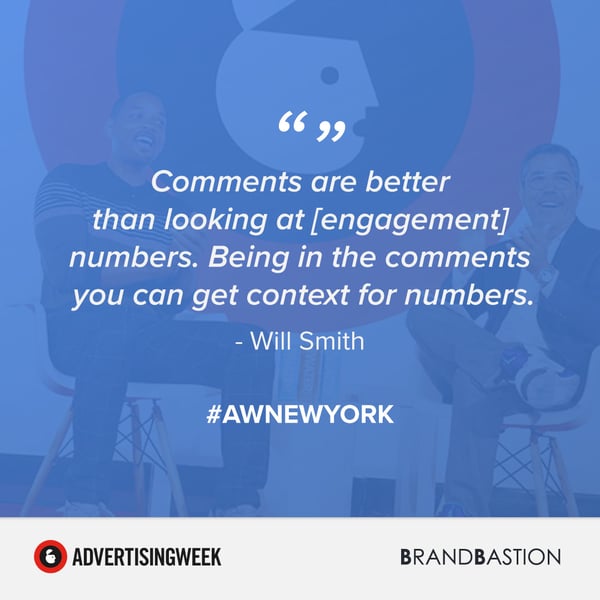 On when numbers can be useful and when they aren’t:

“The metrics themselves (the numbers) keep you from failing rather than making you succeed. The things that succeed will be way outside anything that is predictable. Great success is about being unique. You use metrics to not get fired. But when you want to do something massive you need to go with your gut. For instance, with Titanic... The metrics said it’s a period piece and it can only make a certain amount. Yet girls were fainting and crying in screenings. Metrics are not where the magic is... magic is in you! Check context through what people are actually talking and commenting about.”

On balancing feedback with the bigger picture:

“When going through comments I am looking for patterns, looking for repetitive feedback. This is the beautiful thing of social media where people can actually comment and tell you what they think. However, looking too much at comments can narrow your artistry too much. If I post on Saturday night of me dancing, it will be the biggest hit, so then I would just be dancing if I would just focus on that. What happens if you listen too closely is that you can lose sight of why you’re doing what you’re doing. I take a week away from numbers just to feel the quality of what I’m doing.”

“You can’t be caught up with trying to win. If you get caught in this, you can completely lose contact with the audience. For me, this is the first time I’m in the world with no agenda. I’m not selling anything, I’m not promoting movies, I’m just having fun. I don’t have any movies until next May.” 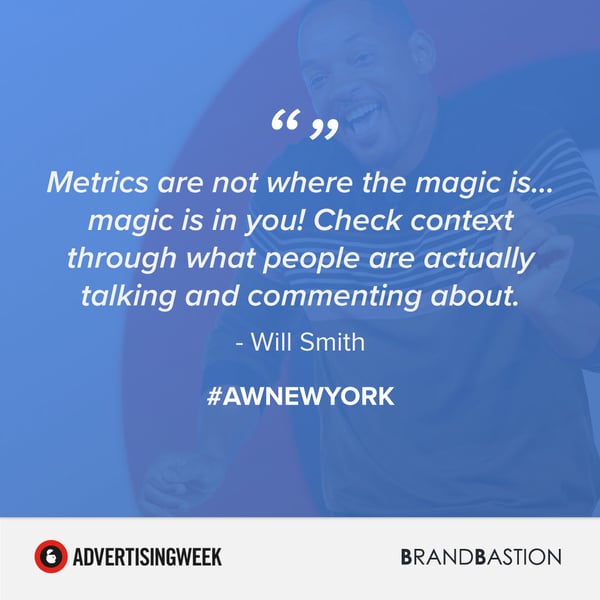 “Everyone should be tapping into the value they offer rather than just promoting themselves. How do your products and services improve lives? Staying in touch with people is key, and this is something you can do through comments, which have been very helpful for me during the past year.”

On dealing with fear:

“Constant and daily confrontation with fear and your edges is hugely important to maintain creativity. You can’t even see things that you’re scared of as your mind blocks them out and your mind rejects them. During the past year, I’ve really been confronting the things that I’m terrified of and I just feel better at everything. I feel more confident and more willing to take a chance and to say something in a meeting that sounds crazy... any confrontation with fear opens you up in way you can’t if your trapped in your box.”

On the power of storytelling:

“When you lean forward and say “let me tell you what happened last weekend”, everyone leans forward and want to listen. Power of storytelling. Figuring out a way to deal with your pain is connecting tissue for you and other humans. Not running from stuff but really understanding them enables you to connect better with other humans also in marketing. Your joy, your pain and your experience are the basis for your stories. Pay attention!!”

“Everyone understands joy easily, but understanding pain is harder. People try to get away from it, but it’s such a rich tool to connect with other humans.”

On transparency in today’s world:

“Transparency is massive in today’s world with social media and so much user-generated content. You can’t hide stuff… You just need to learn from feedback and address it and stay authentic and real.” Will Smith went on to explain that his son told him “cheating is for older generations”, because in today’s world, the second you’re at the movies with someone, four people have tagged you, and you can’t get away with stuff. Authenticity and being able to be self-aware enough to acknowledge one’s mistakes and fix them is more important than ever, be it for individuals or for brands when errors are made.

How To Set Up Community Guidelines On Social Media

When was the last time you updated your community guidelines and social media moderation policies? With “hate speech” an...

3 Shifts for Entertainment Advertisers in the Age of Mobile

Audiences nowadays have more choice and distractions than ever before, and producers need to work harder to get - and ke...

When Facebook rolled out its snooze feature enabling users to block out posts from Pages and other users that they did n...